Why is the use of antibiotics wrong and harmful in viral inflammation?

Bacteria and viruses are so different that it is often said, as a joke, that bacteria bear more resemblance to humans than to any virus. Compared to viruses, bacteria are real giants. 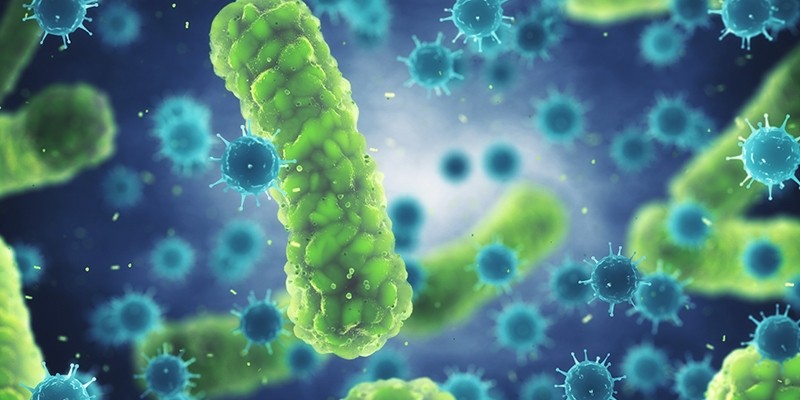 Bacteria and viruses are so different that it is often said, as a joke, that bacteria bear more resemblance to humans than to any virus. Compared to viruses, bacteria are real giants. They can be up to 10 000 times bigger, but that does not matter to us, because in their micro world, they are both so small that we cannot see them with the naked eye. We can only speculate about their appearance and imagine them based on pictures. The only option to really see them is by using a microscope. Then it becomes clear that these are completely different tiny organisms.

The bacterium is a miniature living being. It has a cell wall, capable of dividing itself and lives independently, while it is problematic to say that virus is even alive – no cells, cannot feed or grow. It is actually a stationary particle that contains only a nucleic acid covered with capsid, and the only thing it can do is penetrate the cells of other living beings and take control of them. Then, the affected cells become machines for the reproduction of the virus.

This creates a viral infection whose symptoms are often similar to those caused by bacterial infection. Since they are treated differently, it is extremely important for the doctor to determine whether the body is attacked by a virus or a bacterium. If it is a virus, the following is recommended: a lot of fluid, resting and strengthening the body with natural supplements, while an antibiotic will be prescribed as an appropriate drug for bacterial infection.

Antibiotic is powerless against the virus

Antibiotic does not work on viral infection for a simple reason – antibiotics can do nothing to viruses. This kind of medicine kills bacteria, but not viruses. And if we take it when we have a viral infection, we do more harm than good because antibiotics destroy good bacteria that contribute to our immune system.

Therefore, it is important to be careful with antibiotics and, if possible, not to take them too often and for longer periods because the disturbance of the natural balance of bacteria in the body leads to the weakening of the immune system. This means that when we get sick with some serious bacterial infection, bad bacteria may be already used to the effects of antibiotics and thus develop resistance. Then the medicine is no longer effective and the so-called antibiotic resistance occurs.

It is precisely this growing resistance of bacteria to medicines designed to kill them that took numerous lives. In the US alone, every year, two million people are diagnosed with bacterial infections caused by antibiotic-resistant bacteria, and at least 23,000 of them die of such an infection.

Resistance is also affected by the fact that when the antibiotic is necessary, many do not use it until the end, but after three days, as soon as they feel better, they stop taking the pills thinking they have recovered. It is precisely then that the bacteria not yet destroyed by the antibiotic develop resistance to the drug and can, thus strengthened, continue to multiply.

The use of antibiotics can also cause unpleasant side effects – it disrupts the intestinal flora producing stomach problems, which then have to be treated with other medications; there are rashes, swelling, and anaphylactic shock in severe reactions.

Excessive use of antibiotics in Serbia

An extensive study on the consumption of antibiotics in pediatrics has shown that these medications are consumed five times more than in the European Union. Some doctors easily prescribe antibiotics for the treatment of infections that are caused by viruses. Eighty percent of all antibiotics are prescribed for the treatment of upper respiratory tract, and it is known that as much as 85 percent of such infections are caused by viruses, and not bacteria. There are many reasons for that – from the pressure from parents, who insist on antibiotics, and the doctors giving in, to the overloading of doctors and a lack of laboratories.

It is still very common to take antibiotics “on your own” as soon as the high temperature occurs. That is bad in many ways, not only because of the resistance, but also because, if it is a virus, the infection will not be cured, the infected person will not feel better and he/she will continue to be contagious to everyone around him/her. In addition, the antibiotic will weaken our immune system by destroying good bacteria in the body, which is our first shield in the fight against diseases.

In the fight against viruses, there are two types of medicine – antivirals and vaccines.

Vaccines preventively create immunity to certain viruses, while antivirals are still an unexplored territory still waiting for an epochal discovery, such as the discovery of penicillin in the fight against bacteria. While the antibiotic kills bacteria, antivirals cannot destroy the virus but only inhibit its development. The most famous antivirals are used to treat HIV infection.

For hundreds of other viruses that we encounter each day, primarily the respiratory ones, there is no better defense than the immune system – it recognizes the virus as a foreign body and produces antibodies that inactivate it. Therefore, it is important to let the immune system deal with an intruder in the cells. It is recommended to use natural substances that have proven antiviral effects.

For example, it is known that elderberry contains anthocyanin. It is an antioxidant that protects cells from free radicals and supports the immune system of the body. Elderberry reduces viral infectivity by naturally weakening its power of replication. Since ancient times, elderberry has been recommended in the fight against flu and cough, as well as for the improvement of vision, heart function, and the treatment of not only viral but also bacterial inflammation.