High temperature in children is always a concern for parents. A hot forehead or neck is the most common indication that a child has fever. If the child has a fever they are additionally irritable and moody, they cannot fall asleep, you cannot get them interested in playing, they are lethargic. 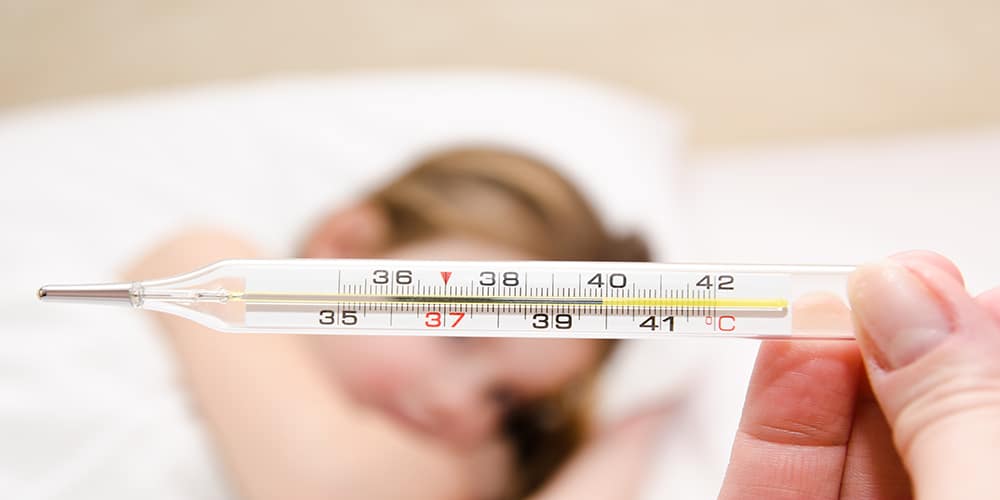 All these symptoms are also the reason that most parents rush to lower their baby’s temperature immediately by using some medicine to lower the temperature (paracetamol, or ibuprofen).

You should know that fever is not a disease, but actually a symptom of the disease, and that it is not treated by lowering it.

It is also important to note that it is not always good to lower your child’s fever immediately.

Find out why high fever occurs most often in children and when it should be lowered.

What is high temperature?

When a child has a temperature of 38 ° C to 39 ° C it is febrile and medically speaking, the child has a fever.

It is important to know when the temperature should go down.

When fever is high, it is a sign that the child’s immune system is working and that the child’s body is fighting infection. Due to the fight of their organism against bacteria and viruses, the temperature rises.

Lowering a temperature of not more than 38.5 ° C is not recommended, because its descent stops and suspends the defense response – simply, it signals the immune system not to do its job. The constant lowering of the temperature weakens the child’s immune system. In the UK, according to official national guides, the recommendation is not to lower the temperature until it reaches 39 ° C.

Children with a history of febrile seizures were excluded from these recommendations.

Lowering the temperature in children

If your child has a high fever, you should not warm them up too much. The temperature can rise even more if the child is too clothed or covered.

Effective lowering of the temperature can be achieved by showering with lukewarm water. It is also important that the child ingests sufficient fluid. The temperature of the room occupied by a child with a high temperature should not exceed 22 ° C.

If the temperature of the child is high and lasts longer than three days, it is lowered by antipyretics with the prior consultation of a pediatrician.

Little ones, while growing up, are very often infected with viral infections. Children in the first 5 to 6 years of life, especially children attending kindergarten, suffer from viral infections 3 to 6 times, even up to 12 times a year.

Viruses are the cause of upper respiratory tract infections (larynx, pharynx, ear, sinusitis) in 85% of cases, and viral infections are the most common cause of high fever in children.

The most frequent cause of fever in children

Only a pediatrician can determine why the child has fever based on examinations and analyzes. Therefore, it is important that you bring your child for an examination if he or she has a fever for 2 – 3 days. If the temperature exceeds 38.5 ° C, the pediatrician should be consulted immediately.

High fever in children most often occurs, as we have said, due to a viral infection. Other reasons may bei:

Febrile convulsions occur during a fever (above 38 ° C) or at the time of its sudden spike. These are seizures due to the reaction of the immature brain of a child to fever. They are quite common in children who do not have neurological disorders.

Febrile convulsions usually do not indicate any serious health problem.

If a child has fever due to a viral infection, administration of a natural remedy that has antiviral properties can lower the fever.

Due to its unique composition, Bimunal Syrup has a proven effect on the virus – it prevents the binding of the virus to the cell and prevents the virus from spreading in the cell. Additionally, it activates the child’s immune system to respond properly to a viral infection. Due to its proven effect on viruses, Bimunal shortens the duration of a viral infection and alleviates all symptoms – including high temperature and fever.